Vector Space Models (VSMs): A conceptual term in Natural Language Processing. It represents words as set of vectors, these vectors are considered to be the new identifiers of the words. These vectors are used in the mathematical and statistical models for classification and regression tasks. Also, they shall be unique to be able to distinguish between them when they are proceeded to the other models.

Word Embedding: A technique to represent the words by fixed-size vectors, so that the words which have similar or close meaning have close vectors (i.e vectors that their euclidean distance is small). In other words, the representation involves the semantic meaning of the words, this is very important in many different areas and tasks of Natural Language Processing, such as Language Modeling and Machine Translation.

Basically, when we work with machine learning statistical and mathematical models, we always use numerical values data to be able to produce the results. Models such as classifiers, regressors and clustering deal with numerical data features. But, how this could be done with text data? How to represent the words by numerical features so that they can be used and fed to our models?

Traditionally, such problem could be solved using a popular approach which is called One-hot-Encoding. In which each word in our corpus will have a unique vector and it will be the new representation of the word.

First, we need to extract the unique words of the data, in our case, the unique words are the set V = {I, like, playing, football, basketball} and ||V|| = 5. Note that, you need to normalize the words and make them all in lower-case or upper-case (e.g football is the same of Football), we don’t care about the letter case in such representation.

Now, we create a vector with all zeros, and its size is the number of unique words ||U||, and and each word will have a 1 value in unique index of the initial zeros vector. So, our words representation will be

As you see, it is very simple and straight forward. It can be implemented easily using programming. But, you for sure noticed its cons. This approach heavily depends on the size of the words, so, if we have a corpus with 1M words, then the word dimension would be 1M too! which is very bad in performance, also, the representation itself doesn’t show the semantic relations between the words and their meaning, so, this representation doesn’t care about the semantic meaning of the words, it only focus on transforming the words to the Vector Space Model where we have unique vectors, regardless their distances.

But, you can use this method if the problem that you want to solve isn’t closely related to the semantic relations or meaning, also, if you know that your unique words size isn’t large.

Word2vec is a technique or a paradigm which consists of a group of models (Skip-gram, Continuous Bag of Words (CBOW)), the target of each model is to produce fixed-size vectors for the corpus words, so that the words which have similar or close meaning have close vectors (i.e vectors that their euclidean distance is small)

The idea of word2vec is to represent words using the surrounding words of that word. For example, assume that we have the following sentence:

Well, this idea is considered to be philosophical. If you think about that, you will realize that we, humans, know the meaning of the words by their nearby words. For example, assume that we have an unknown word that you haven’t seen before, lets call it word “X”, and we have the following sentence:

So, you may not know the meaning of X, but you for sure know that “X” is something we can play with, and also, it is something that can be enjoyable to some people. Your brain reaches to this conclusion after reviewing the X’s surrounding words, “like” and “playing”. This is the idea of inventing word2vec technique.

In conclusion, word2vec tries to use the context of the text to be able to produce the word vectors, and these word vectors consist of floating point values that are obtained during the training phase of the models, Skip-gram and CBOW, these models are Shallow Neural Networks, they do the same job, but they are different in its input and output.

Before getting into the word2vec models, we need to define some sentences as a corpus to help us in understanding how the models work. So, our corpus is:

D = {
“This battle will be my masterpiece”, // LoL players will relate 😛
“The unseen blade is the deadliest”
};

As we did in One-Hot-Encoding, we need to extract the unique words and initial its vectors by a sparse vector. We need to do that to be able to use these words in the Neural Networks. 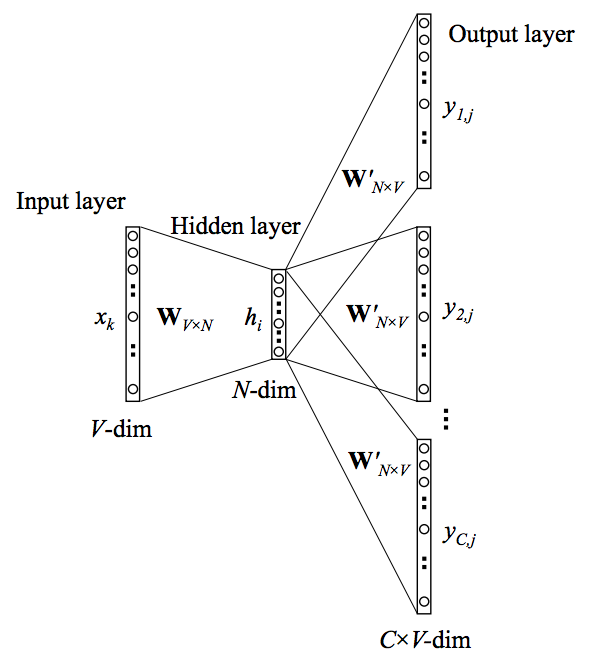 Skip-gram is a Shallow Neural Network. The target of this model is to predict the nearby words given a target word. So, the input of this network is a 1-hot-encoded vector of the target word and the output is N words where N is the window size of the context which is determined by the network creator. In the above figure, the number of words that shall be predicted are 3 words, so, we have 3 Softmax layers and the number of neurons each layer is the vocabulary size.

Let’s see how the model works with the sentence “The unseen blade is the deadliest”. Assume that the target word that we want to know its representation is “unseen” and the nearby words are “The”, “blade” and “is”. Note that, our target vector size will be 3, in other words, we want our embedding vector to be a fixed-size of 3, also, the weights are initialized with random values like any other neural network. Regularly, the weights are initialized with Gaussian distribution with known mean and variance.

Now, we can apply Softmax activation function to each of these vectors, so that we will get the output words given the target word “unseen”.

During the training phase, we have the actual output of the target word, so, we get the error of each output layer using a loss function. The loss function could be Mean Squared Error or Cross Entropy. Now, we have 3 errors of each Softmax layer, we get the average of the error by dividing the summation of the errors by the number of  errors (3 in this  case).

After obtaining the error, we backpropagate the error to the weights so that we update the weights values according the obtained error. As you see, the values of the weights would change for each batch of training, which also would change the words representation.

We continue the iterations till we reach the maximum number of epochs or we get the target error so that we can stop the training and get the Input-to-hidden weight matrix in which each row will represent each word in the space.

Word2vec is a technique which consists of a group of models (Skip-gram, Continuous Bag of Words (CBOW)), the target of each model is to produce fixed-size vectors for the corpus words, so that the words which have similar or close meaning have close vectors (i.e vectors that their euclidean distance is small)

CBOW is also a Shallow Neural Network. The target of this model is to predict a target word given nearby words. So, the input of this network are N words where N is the window size of the context which is determined by the network creator and the output is the target word which is obtained using Softmax layer. In the above figure, the number of words that will be used as an input would be 3 words, also, the network weights are initialized randomly in the beginning.

Recalling our previous sentence, “The unseen blade is the deadliest”, let’s see how the model works with it. The target word to be predicted is “unseen” and the context words are  “the”, “blade” and “is”.

To get the values of the hidden layer, we just need to get the average of the resultant of multiplying the input words of their weights matrix.

Now, we have the output layer values, we need to apply Softmax again to get the target word.

The predicted word is “masterpiece”. We have the actual output like before, so, we get the error and backpropagate the error to the weights so that we update the weights values.

Word2vec is considered to be a the main core of applying deep learning in Natural Language Processing. Traditionally, rule-based systems that depend on some syntactic and linguistic feature were used to solve most of NLP problems and application.

Any rule-based system cannot generalize the solution to all real world data. Also, things that could be applied in a language doesn’t necessarily could be applied to the other languages. So, it was a must to make deep learning systems that depend on the semantic representation of language words and text.

Also, there are some hard and challenging problems in NLP that needs deep learning to be solved, such as Machine Translation and Parapharsing Detection. Both, depends on the semantic of the words (which is common thing in any language), so, it was a must to move to deep learning to enhance the learning in the semantic way, instead of syntactic and language grammar that use rule-based algorithms. [https://www.quora.com/Why-do-we-use-neural-network-to-do-NLP-task/answer/Ahmed-Hani-Ibrahim]

As you see, it seems that Word2vec needs so much amount of training data and high performance machines to be able to train these data. If you think of that, we applied Softmax on the output layer. Applying Softmax on very huge size of words would be very costly and would need so much time, so, it was needed to make some optimization to the Softamx to reduce the process complexity. In the next post, we will talk about Negative Sampling and Hierarchical Softmax.