One-to-one: Problems that are concerned into getting a direct relation between an input word and output word. For example, the relation (like, love) is considered to be a semantic-level relation which represents that the 2 words have somehow the same meaning. The solution to this problem is building a model that takes an input word and produce an output word so that the model learns the nature of the relationship between the 2 words.

One-to-many:  Problems that are concerned into getting a direct relation between an input word and several words (context). The relation (vehicle, [car, bike, boat]) is a hypernym relation.

Many-to-one: Problems that are concerned into getting a relation between several words (context) and  a word (entity, class, ..etc). The relation([bike, car, boat], vehicle) is a hyponym relation. Also, Sentiment Analysis is considered to be a many-to-one problem because given a sentence which consists of several words, the output shall be one word that describes the polarity (negative, positive, neutral) of this sentence.

Word Embedding: A technique to represent the words by fixed-size vectors, so that the words which have similar or close meaning have close vectors (i.e vectors that their euclidean distance is small).

One-hot Encoding: A naive word representation technique. Non-semantic representation approach. For each word in the corpus, we represent it with a sparse vector. The size of the vector is the vocabulary size. Each word is uniquely identified by setting “1” in a unique index, so that the words have different vectors.

At first, let’s define our dataset that we will go through on this tutorial. As mentioned, we want to apply a model to learn string reversing problem. So, our dataset should be consists of the characters that would be used to make the strings. For simplicity, we will assume that the characters size are only 3, which are ‘a’, ‘b’ and ‘c’. All strings that the model can handle should be only contains these characters.

We need to define the word representation for our corpus. For simplicity too, we will use One-hot encoding technique for the characters representation. Actually, we don’t have to use Embedding for such task as we don’t care about the semantic level of the generated words. We only care about reversing the characters, and the reversing doesn’t need to understand the words semantics.

So, our representation would be 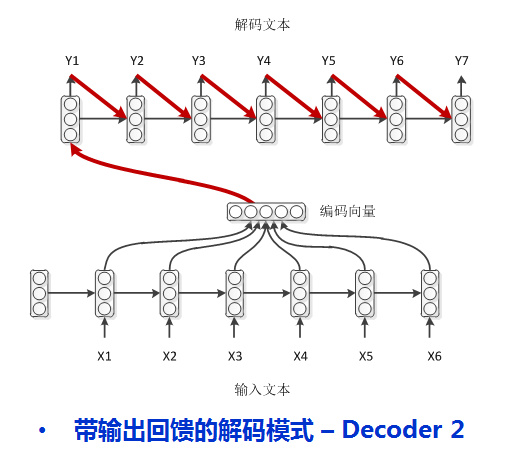 Any sequence-to-sequence (seq2seq for shorten) model consists of 2 components; an encoder and a decoder. Both of these components are regularly a type of Recursive Neural Network, it could be a simple Recurrent Neural Network (RNN) or Long short-term Memory (LSTM). They do the same work, but the number of trainable parameters differs from a network to the other.

The encoder tries to get a vector representation for the given context, for each input, it calculates the hidden layer state, and this state is changed for every new input word. So, theoretically, the final vector should contain all the information of the input encoded as a fixed-size vector. This vector is called “Thought Vector”.

After finishing the encoding phase, the decoder takes the thought vector and use it as the initial state. The decoder continues to produce output words using the Softmax layer, till whether it produces a specific token that is determined by the user, something like “END” which tells the decoder to stop produce output or by setting the maximum length of the output words.

We will show how the encoding and decoding components work in the string reversing problem.

Note that, There are multiple different styles of Sequence-to-Sequence models. As far as I know, there exist 4 different styles. The difference always in the decoder component and its input criteria. On this post, I illustrate the Feedback Encoder-Decoder model, in which the output of the decoder in a time step becomes an input to it in the next time step..

(Click on it to see in a better resolution)

At first, lets define our model parameters. From the above figure, we have the following

We need to initialize the weights of our model. Regularly, the weights are initialized whether in Gaussian or Uniform Distributions. But for simplicity, we will just initialize it by the following

As we mentioned, the target of the Encoder is getting a vector representation for the given context, so, for each time step, we feed the network with 1 character after transforming it as a vector of real-number values by the One-hot encoding. We can conclude from that is that for each character we will update the hidden layer state will we reach the end of characters

Now, lets do the math for each time step of the string ‘abc’

This is considered to be a mapping problem, so, we could just use Multi-layer Perceptron (MLP) to solve it as long as we define the maximum length of characters per string. What I want to say is that this problem doesn’t show the real power of seq2seq models. The target was only show how this model works and how the encoder and decoder cooperate to produce the output.

(Click on it to see in a better resolution)

The second important difference is that the input of the decoder at time (t + 1) is the output at time (t). The decoder uses its previous output to produce the output. This also seems logical. Recalling Recurrent Neural Network Language Model (RNN-LM), we use the previous words to be able to produce the current words. This is the same case here.

As we did before, we have the following

For simplicity, we will initialize the model weights by the same encoder’s values., in addition to the _Wo values

Now, lets do some math here too.

First, we start by empty character. Because there is no previous output. So, we only will depend on the encoder last hidden state and its weight.

To know the output character, we transform the output vector to probabilities using the Softmax activation function.

To know the actual character, we take the index of the maximum value, which is 0.81 in this case, which corresponds to the vector [0, 0, 1] which is the representation of character ‘c’.

We use this character as the new input to the decoder.

Multiplying the hidden values with the output weights

Applying Softmax will get the character ‘c’

Multiplying the hidden values with the output weights

Applying Softmax will get the character ‘c’.

So, the output of the decoder is the sequence ‘ccc’ which is not the reverse of the  original string ‘abc’. This is expected as we haven’t trained the model yet and the weights haven’t updated yet.

After obtaining the sequence, we get the error and backpropagate that error to update the weights using Gradient Descent optimization algorithm.

– The length of the input doesn’t necessary be the same of the output length. In that case, the decoder will continue produce output tokens till it fires a specific token that is determined by the model creator

– The above model could be replaced by Auto-encoder to get the input sequence representation as long as we know the number of input words or tokens. And the bottle-neck features would be the thought vector of the input. Then we use it in the decoder as its initial state

You know what? I am in deep love with sequence-to-sequence models. At the past, I always felt stupid while working on any sequence to sequence problem. Why? BECAUSE I NEVER FULLY UNDERSTOOD HOW IT WORKS. This is so complicated. I loved something that I was bad with, not only bad, but I felt stupid the most when working on any related problem to it.

As we are humans, we always try to correct and fix our relationships with things that we aren’t good with as long as we love or has an interest in it. So, I tried to make a fix with these models so that I can understand how they work, and also that would help me in different problems in Natural Language Processing.

That’s why I took the decision to make an intensive study and research to fully understand it and the other seq2seq different model styles.

On this post, I illustrated one of the four models of seq2seq. I will try to make a post for each of the remaining models.

One thought on “Feedback Sequence-to-Sequence Model – Gonna Reverse Them All!”